As batteries and solar technology become less expensive and more advanced each year, the solar generator marketplace has opened itself up to several power solutions for off-grid use.

However, gas generators have been around for longer and have been a reliable solution for many people’s homes.

Both solar and gas generators compete in the same industry of off-grid backup power, yet they are completely different in their functionality.

Gas and solar generators have a lot of differences that make them valuable depending on the situation or activity you intend to use them for. Later in this post, I’m going to show you direct comparisons between the two.

Not all gas and solar generators are the same type and size, so I’ll break down the various versions of both before getting into examples.

But first, I’ll explain in a bit more detail the advantages that solar generators have over gas-powered systems and vice versa.

Which is better – solar generator or gas generator? 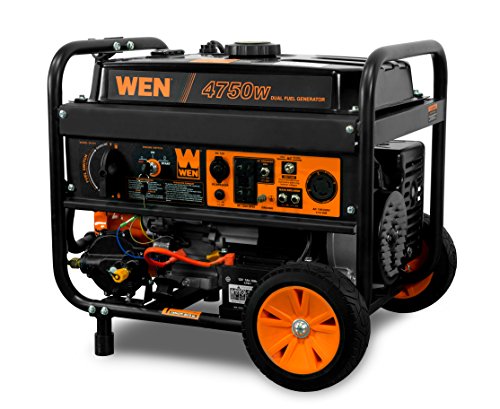 As stated before, solar generators are ideal for long-term use over gas generators.

There are several additional elements to compare regarding gas and solar generators, such as the activity you intend to use it with, a breakdown of costs (short and long term), maintenance, and more.

Both systems are designed to power devices and appliances off the grid and to do it repeatedly for years. Gas generators do not last long unless they are constantly refueled. Both the cost of fuel and the dependency on it make most gas generators unreliable as a long-term backup power solution.

A portable solar generator, depending on its size, can be used for camping, RVs, cabins, and partial home-backup power. Smaller models (Ex: Jackery Explorer 300) are used mainly for charging devices. Larger models (Ex: Yeti 6000X) typically stay in one location and can power large appliances.

Solar backup generators can provide either partial or full home-backup power during power outages. Some models can also be used to offset energy costs while being connected to the grid, which is called peak-load shifting.

A conventional gas generator produces AC power by running its engine at a constant speed (RPM). They are less efficient than most inverter generators. They can also damage sensitive devices like computers, smartphones, and other electronics because the AC signal can be distorted under heavy loads.

The largest type of backup gas generator is the standby generator. It is usually a stationary system that is used for backing up homes and businesses during grid failures. Due to their massive power outputs and gas reserves (typically diesel and/or natural gas), they tend to cost thousands of dollars.

Most standby generators are equipped with an automatic transfer switch (ATS), which automatically turns on the generator after a power outage is detected.

Below are five examples of gas and solar generators with similar AC output power ratings. The examples go from the largest to the smallest models.

The following are some clarifications for when you check out the data tables:

These are the largest types of generators you can get in both the gas and solar generator markets. Of course, there are larger examples than the ones I give below, but these are still powerful and can provide full home backup power.

For the Generac gas generator, its tank size refers to its liquid propane tank. These come in several sizes, but for this model, its tank is typically much larger than a standard one found with most outdoor grills. I’ll be discussing its tank size and cost later on.

The Tesla Powerwall and Powerwall+ require you to install Tesla solar panels on your roof in order to get the Powerwall. This adds significant costs to this system if you were to get it, but it can also add value to your home.

In this comparison, it seems like the Generac gas generator would be the clear winner due to a higher output, longer running time, and lower upfront cost. However, the Generac consumes a lot of fuel due to its high output.

Both systems aren’t cheap, but when also considering that you can sell solar power back to the grid with the Tesla system, this may bring the overall costs of the Generac and Powerwall+ closer to even over time.

For a real-world example of solar savings over time, energysage has a great article with a table listing estimated solar savings by state.

The models below actually have similar power outputs as the previous models, but these ones are portable.

This gas generator is not an inverter generator, so it may not produce the same quality of electricity needed to charge/power sensitive devices and electronics.

With the EcoFlow Delta Pro, you can combine two units together with EcoFlow’s Double Voltage Hub (its manual is in the table). This allows you to run 240V appliances and achieve twice the power output of one Delta Pro. The Bluetti EP500 and EP500Pro can also do this, but the Delta Pro has a higher overall AC output.

The EcoFlow Delta Pro can also expand its battery capacity up to 25kWh. At this capacity, it can run at 50% load (3,600W) for 6-6.5 hours, and this is not factoring in solar recharging.

The Titan solar generator is among the best solar-powered generators available today. It has some additional features that I’ll get into after the table. It is up against an efficient inverter generator with a similar AC power output.

Clearly, the WEN inverter generator is much cheaper than the Titan with a second battery. With a longer runtime and higher continuous power output, the numbers seem to put the WEN system as the obvious winner.

However, there are several qualities to the Titan that aren’t in the table:

The real question to ask yourself when deciding on these options is “what will I use it for?” If you don’t have many power outages and just want a generator that will do its job every once in a while for an hour or two, then the WEN is the best option.

If you’re looking for a system that can provide not only backup power but also help reduce utility costs, then the Titan might be the ideal option. Another area where the Titan would be superior is an extended power outage. Unless you have a large reserve of gasoline available, the WEN system will last about 1/3 of a day before refueling is needed.

Each battery added to the Titan increases its half-load runtime by about an hour, plus, it has pass-through charging, so you can charge it from solar while using it.

Gas vs. solar generator in the 2kW output range

These two models have similar continuous power outputs, but they are of different sizes. The WEN generator is a small gas generator, whereas the Yeti 3000X is a large solar generator.

As you can see, the price difference is staggering.

At over eight times the price of the WEN, the Yeti 3000X is a hefty investment – especially if you only need the generator for a short-term backup power source.

You could opt for the smaller Yeti model, the Yeti 1500X, but it will still cost about $2,000 and have half the runtime.

If I just wanted a backup power source for my fridge when there’s an outage, the WEN is the clear-cut winner.

The TogoPower generator is small for a portable gas system, but the Bluetti EB240 is a large solar generator with below-average output power for its size.

What sets this comparison apart from the previous ones is the hours of runtime. The EB240 is much closer to the TogoPower model.

Like all of these comparisons, the biggest difference is in price. Since it’s such a steep difference, it still comes down to what you intend to use it for.

You’ll have extended off-grid power with the EB240, but if you don’t need that capability, it’s obviously best to get the system that’s a whopping $1,200 cheaper.

Are gas generators expensive to run?

Gas generators are expensive to run depending on: fuel type, fuel consumption, power output, and runtime. Gasoline, diesel, and propane generators cost more to run than ones powered by natural gas. Inverter generators tend to be more efficient than conventional gas generators, costing less to run.

Below I have a table with five different gas-powered generators along with their estimated costs over time.

The data in the table includes the following assumptions:

As seen above, the price of running a gas generator mostly depends on:

Yearly hours of runtime needed from your generator can’t really be predicted, but where you live and your experience in prior years with outages can help.

For example, I live in Chicago and we’ve had 3-4 outages in the past year. One of them was for about six hours, while the others were no longer than two. This totals about 12 hours off the grid – I can factor that into estimating future runtimes if this has been a pattern over the years.

Although the average power outage in the U.S. was relatively short-lived (roughly 2-4 hours) based on 2016 data, some areas can experience extended power outages.

“Excluding major events, the average electricity customer outage durations in 2016 ranged from 27 minutes in Nebraska to 6 hours in West Virginia. When major events are included, Hurricane Matthew caused South Carolina’s power outage duration to be the highest in the nation for 2016, averaging more than 20 hours per customer.”

Unfortunately, natural disasters can significantly extend the duration of power outages. Where I live, tornadoes and powerful storms have caused this to happen multiple times over the years. On the coasts, hurricanes and tropical storms can cause massive power outages.

“Forty propane tanks. That’s what my family needed during Hurricane Sandy, a 10-day power outage, to keep just the essential parts of our house running for part of each day.”

Even though it’s not entirely possible to get an accurate future runtime with a generator, having a backup plan is a must to ensure your home has off-grid power.

Gas-powered generators have been in the industry for a while. They have a lot of power, and also can run for a long time.

However, solar generators cost less over time, have no sound when in use, and require much less maintenance.

When it comes to being reliable, it makes sense to go electric. A solar generator for your home can bring the extra power needed in those just-in-case power outage situations.

For more information on solar-powered generators, check out my reviews below, where I show you which models are the best for various activities/applications:

Air conditioners use a lot of power throughout the day and are one of the largest consumers of power inside a home, RV, or cabin. Regardless of the type of AC unit you are using, it will almost...

The best portable solar panels provide utility for a multitude of activities. They provide renewable, free energy while at home or on the go. In general, these systems work by collecting sunlight...