Being very powerful and multi-purposeful, the Yeti 1250 solar-powered generator can bring your home the backup power it needs if the power goes out, or if you’re on an outdoor trip or tailgate.

Being one of Goal Zero’s earliest solar generators, the Yeti 1250 set the foundation for several of the company’s future large power stations.

One of the many benefits of using a system like the Yeti 1250 as opposed to most other lithium-powered solar generators is that you can replace its battery.

I have a list of solar generators with replaceable batteries that you can read in addition to this post, found here: 4 Solar Generators With Replaceable Batteries (Lead-Acid + Lithium).

Quick Overview of the Yeti 1250

The Yeti 1250 is a solar generator made by Goal Zero with a lead-acid battery. Its battery has a 1,200Wh capacity and with the inverter, the AC output runs at 1,200W continuous and 1,500W surge power. The Yeti 1250 can be used for home-backup power as it can power a full refrigerator and microwave, among other appliances.

Regardless of the situation, the goal zero Yeti 1250 makes a big difference when powering your necessities.

This battery pack is an outstanding and reliable alternative to traditional gas-powered backup generators.

Being an environmentally friendly piece of technology, this generator can still power devices and appliances with ease.

Since it is nearly completely silent, you can bring it into the house and sleep easily.

Key Advantages of the Yeti 1250

Being the largest lead-acid solar generator from Goal Zero, the Yeti 1250 is able to power many different appliances in your home as well as your electronic devices.

At 1,200 watt-hours and 100 amp-hours, the Yeti 1250 brings a large capacity to run your devices for the majority of your day. With all of this power, it makes it easy for this generator to power larger appliances and devices such as hair dryers and even refrigerators!

The generator also has the ability to hook up to multiple other generators/power packs so you can have more power if you need it. With this technology, you can be safe from long power outages.

With three AC ports, two 3A ports, three USB ports, and a 12V port, the Yeti 1250 can power many devices at once and gives you and your family/friends the power capacity needed for any big occasion.

With this in mind, it is also important to note that the Yeti generators charge your devices as fast as a wall outlet. There is no difference here.

Besides having solar charging capabilities, the Yeti 1250 also comes with a wall charger, so you can be prepared for any situation that might come up.

With these options, you can charge it before going out and then stay off the grid for extended periods of time while charging it with solar panels.

The Yeti 1250 generator is not light whatsoever. It is 103 lbs, but if you find yourself needing to bring it to and from the car and other places, it comes with a roll cart for easy transportation.

If you’re using the Yeti 1250 specifically as a home backup system, you will be set, as you probably need much less mobility.

Using a lot of power, the Yeti 1250 solar generator has a screen on the front of it, showing you the capacity and the amount of power being used as well as how much power is going into the generator while charging it.

The display also shows the amount of power left in 20% increments.

Being easy to replace, lasting hundreds of life cycles, and maintaining a consistent temperature regardless of environmental conditions, the AGM lead-acid-based battery is an optimal battery for the Yeti 1250.

There is another battery that has 25% more power, the VMAX battery, which can replace or be a great backup battery to the Yeti 1250.

As mentioned prior, the Yeti 1250 uses a lead-acid battery. Although versatile due to it being replaceable, it is still very heavy and inefficient compared to lithium-ion and especially LiFePO4 solar generators.

As said before, being over 100 lbs, you need some muscle to lug this generator around.

Luckily, Goal Zero thought about this and included sturdy handles and the roll cart, so moving it won’t be as tough. However, carrying the solar generator is definitely a two-person job.

The Yeti 1250 does not have updated USB ports to support USB-C charging. This is a common theme amongst early solar generator models and even some newer models.

The Yeti 1500X is the successor to the 1400 Lithium and has several improvements including a much higher solar panel input for faster recharging.

You can read more on the Yeti 1500X in my overview and analysis post here: The Yeti 1500X from Goal Zero – Overview + Comparison.

Why Choose the Yeti 1250 Over Newer Goal Zero Models?

The key difference and only factor that really sets the Yeti 1250 apart from newer Yeti models is its ability to swap out batteries.

Lead-acid batteries in the Yeti 150, 400, and 1250 can all be replaced easily by swapping them out. This is not possible in the lithium NMC batteries in the newer solar generator models from Goal Zero.

Therefore, instead of needing to refurbish the system or buy an entirely new one once the battery is used up, you can purchase a battery from Goal Zero or a different third-party website to bring your system back to working condition.

The following two accessories assist in solar charging the Yeti.

If you intend to use multiple solar panels for recharging, the company sells combiner adapters to pair them together. 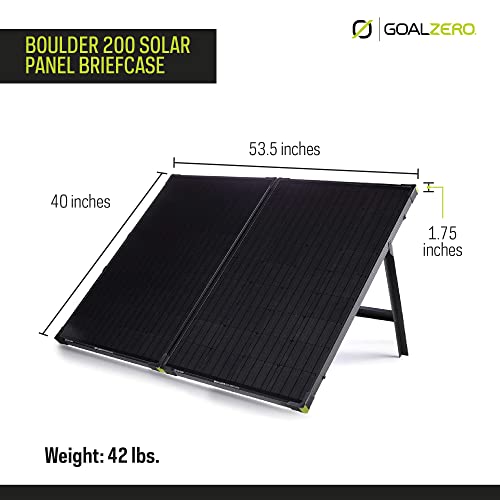 With 200 watts of power, this large solar panel can recharge your battery off of the grid.

The monocrystalline panel folds into a briefcase-style enclosure and has a carrying handle for ease to and from your destination.

The panels also have a kickstand, so you can angle them towards the sun for a stronger power intake.

This adapter is frequently purchased with Yeti solar generators and other Goal Zero products.

The extension cable allows you to connect solar panels to your generator from a 30-foot distance.

Being an important tool for connecting to a solar panel, it is highly recommended to get this along with the generator.

A: It is a 12V, 100Ah sealed lead-acid battery (AGM), which is very similar to your car battery. When storing the Yeti 1250, make sure to keep it connected to power at all times – this will make sure the battery lasts much longer.

Q: Am I able to replace the battery inside the Yeti 1250?

A: Yes you can, it is easy to replace and you can even buy a more powerful battery for it as well, for backup purposes. The VMAX battery is 125Ah instead of the standard 100Ah, giving you an extra 25% battery life.

Compared to a gas generator, the Yeti 1250 solar generator has a much lower maximum power output.

However, it is able to be used indoors, is silent, and is rugged and portable, making it a top home backup system as well as an outdoor generator.

With three different generators available from Yeti, including the Yeti 150, 400 Lithium, and 1250, this generator is the top of the line in overall power output.

However, if you do not need the extra power, or need more portability, I highly recommend reviewing the others mentioned above.

In addition, I’ve written a post showing four different solar generators with replaceable batteries. There are lithium-ion examples in the article that are much lighter than the Yeti 1250.

You can read my post here: 4 Solar Generators With Replaceable Batteries (Lead-Acid + Lithium).

With so many rigid solar panels available on the market today, the ideal one for you may be hard to find. After testing the BougeRV 180W solar panel myself, I found that it has several qualities that...

Within Goal Zero's Yeti X lineup is one of the largest solar generators available on the market today - the Yeti 6000X. Although its port options and LCD layout are similar to other Goal Zero...