Renogy is a leader in providing components and kits for off-grid solar systems, but their portable power station options are scarce. I wanted to see how Renogy’s models compared to ones from other brands, so I decided to review the Phoenix 300 to find out if it could be a reliable off-grid tool.

The Phoenix 300 is a micro solar generator that stores up to 337Wh of charge in its battery. At 6.4 lbs, the Phoenix 300 is one of the lightest portable power stations for its battery size. However, it doesn’t have an LCD screen, which is not ideal for monitoring power consumption.

Although its absent LCD screen is a major downside to this product, its low price and lightweight construction make it ideal for people wanting a budget-friendly portable backup system.

I personally use a solar generator similar to the Phoenix 300. It’s called the Jackery Explorer 300 and it’s one of my go-to power stations because it’s lightweight and can easily fit into my backpack.

I recommend checking out my review and testing of the Jackery 300 so you can compare it to the Phoenix 300. My post can be found here: Jackery Explorer 300 Review & Test (Plus Comparisons). 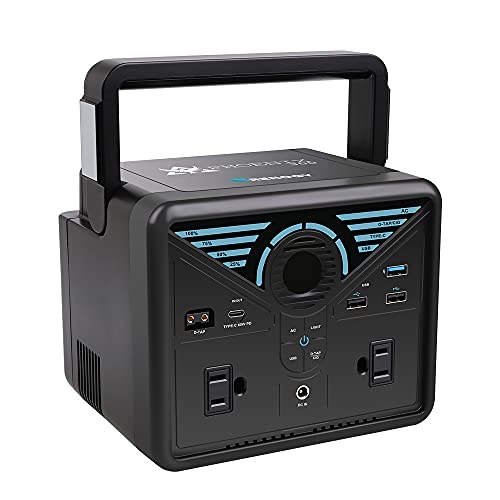 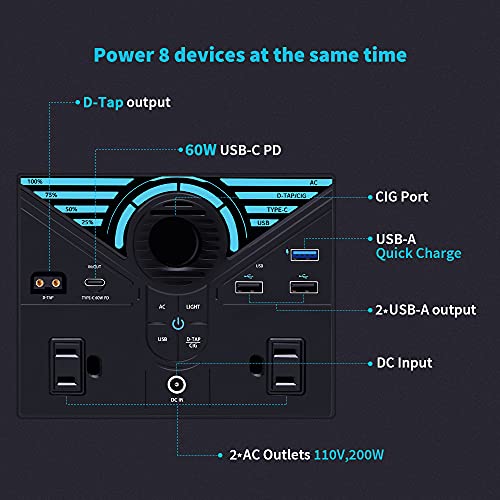 The product specifications are unique and one-of-a-kind in the market today, marking it as a top choice for people looking for the included features.

The product specifications are as follows:

In terms of output power, the Battery Management System (BMS) controls the voltage, temperature control, short-circuit protection, and over-current protection to keep both the power station and your devices protected from malfunction.

The Phoenix 300’s battery will give you the freedom to charge the following:

The Renogy Phoenix 300 is optimized to be as light as possible and weighs in at 6.4 lbs.

Its dimensions create a compact unit, measuring out at 7.1 x 6.1 x 5.6 inches. Its size and weight make it versatile, and bring along an exceptional power capacity.

The unit’s material is made from ABS, which has a great response to heating and withstanding high temperatures. The wise selection of incorporating ABS in the design has many advantages. ABS is durable because it has a high tolerance for corrosive substances and physical impacts.

The second material used in the structure is polycarbonate (PC). PC is known for its strength and high resistance to heat and electricity – an ideal choice for a portable power supply.

There are several advantages and reasons for using a lithium-ion battery in the Renogy Phoenix 300 over other types of batteries. These advantages are listed below:

There are several similar power stations to the Phoenix 300 in terms of battery size; however, each model below has different characteristics that make them unique.

This table shows the differences between the Renogy Phoenix 300 and other portable power stations with similar battery sizes.

Although the Phoenix doesn’t charge as fast as the other options and also has the lowest AC output of the four, it is lighter and less expensive than all the others.

The price difference may be beneficial for you, but also note that the Phoenix doesn’t have an LCD screen. You may want to know the exact state of your battery and the input/output wattage, but unfortunately, the Phoenix barely has any of these features. It only has a battery status indicator that displays in 25% increments.

What’s most unique about this power station is its D-Tap port, which I’ve never seen on any other model I’ve reviewed. This can be an advantage if you need to use a port like this for your devices and electronics.

Plus, its car port output has the same 11-17V (10A) rating as the D-Tap, which makes it capable of higher output power than the typical 12V/10A output seen in most solar generators.

The Phoenix 300 struggles to charge fast, isn’t powerful in AC output power, and doesn’t have an LCD screen. These factors are crucial in estimating the overall value of a portable power station and it underperforms on all three of them.

The only situations where the Phoenix 300 can be beneficial are:

If you think this power station will get the job done for you, you can check out the Phoenix 300 via the links below.

Otherwise, I recommend the Fanttik EVO 300 or Jackery Explorer 300. The Jackery model is closest in size and weight to the Phoenix, and the EVO 300 is the closest in price, at $250.

You can read my reviews of these alternatives below, where I show you my testing results and each model’s subleties.

If you’re looking for a more compact power station, Renogy has a model available called the Phoenix 200, which is about two pounds lighter than the Phoenix 300. Its port options are a bit different than the larger model, but its design is identical. If you could use additional portability, you can check out the Phoenix 200 here on Renogy’s website.